No saltwater. No sharks. No typhoons, tsunamis or hurricanes. National Geographic had their own reasons for naming Sleeping Bear Point one of the world’s most beautiful beaches. Here are five more they didn’t tell you about.

Not trying to tear down swimming in the sea, but you definitely have to ask yourself if the human body was meant to swim in something that triggers a gag reflex if you accidently take in a mouthful of the stuff. Think about it. And then there’s the smell. Even on its worst day Lake Michigan never smells like the ocean. Dry off after a dip in Lake Michigan, and you won’t be coated in a sticky, briny crust. So to sum up: Freshwater is good for swimming. Saltwater is good for stuff like removing underarm stains on your business shirts, cleaning brooms and coffee pots; seriously, look it up.

What do sharks and the Great Lakes have in common? Absolutely nothing. Contrary to semi-regular stories about Great Lakes sharks—usually around April Fool’s Day like this whopper spotlighted on MLive last year—there really nothing in Lake Michigan that can bite or, for that matter, sting you. No sharks. No jellyfish. No horseshoe crabs or stingrays. Need we say more?

No Typhoons, Hurricanes or Tsunamis

Lake Michigan does bring some doozy wind and electrical storms. But city-leveling tsunamis and hurricane-force winds capable of sending weather men flying? No. At worst, storms that come in off Lake Michigan are responsible for some down trees and, occasionally, wicked-cool lightening that can be fun to watch.

Looks like fun, doesn’t it? Most people like going to the beach to relax—to get away from the maddening crowd, not join it. The Sleeping Bear Dunes has 35-miles of shoreline along the eastern shore of Lake Michigan—and most of it is so far from the nearest road that it hardly ever sees any beachgoers. 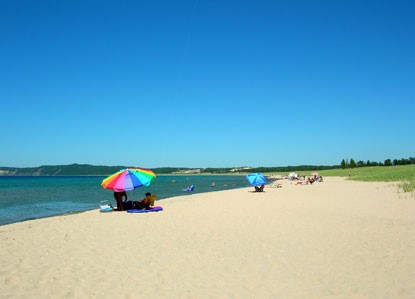 Where crowds are concerned, most beaches in the Sleeping Beach Dunes look like this in the peak of summer. But if you look at this picture, you may notice something else—the blue sky. No haze and no clouds means very low humidity, unlike on East Coast beaches where the sweaty summer air can be so thick and sickly hot it can frizz your hair and make it feel like breathing through a straw.