Things That Make You Go Hmmm…

If you know where to look, the Sleeping Bear Dunes National Lakeshore is full of natural curiosities and manmade artifacts that might go unnoticed to casual passersby.

Since an experience is made that much richer if you know exactly what you’re looking at, we’ve put together this shortlist of some cool Lakeshore discoveries and the backstories behind them. 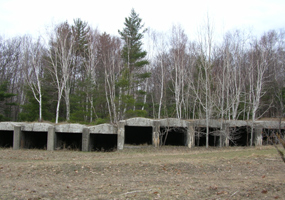 Located at the trailhead of the Alligator Hill Hiking and Ski Path, theses concrete structures are actually old kilns built in the 1950s by lumberman Pierce Stocking. The sawmill he set up near this spot produced considerable waste that was converted into charcoal in these kilns. The loose, dusty, random-sized material was packed in bags for shipment to stores in much of Michigan for sale to campers and picnickers.

The kilns are concrete ovens in which limbs, slabs and other sawmill waste were stacked as tightly as possible. The open front was closed with concrete blocks and the wood set on fire just before the last blocks went in. Controlling the air intake was tricky: too much air and the wood was consumed, too little air and the fire went out. If successful, the fire burned slowly for several days. Once it was out, the charcoal was removed and spread to cool. Then it was moved to the bagging shack. 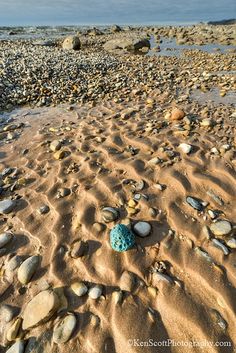 Prized by rockhounds and jewelry makers, Leland blue stones are unique reminders of a time when iron ore was smelted in Northwest Lower Michigan. In the late 19th century, ore was carried from Escanaba to Leland on large schooners and steamers that stopped in Leland to deposit their load at the Leland Lake Superior Iron Company (where Leland Harbor and Fishtown are located today).

Using a high-grade of charcoal made from the surrounding forests of beech and maple, factory workers heated up the iron ore to produce pig iron. During the smelting process, all the “junk” that floated to the top was skimmed off and thrown away on the nearby beach and in Lake Michigan. Forged by man and shaped by nature, this beautiful blue byproduct still shows up from time to time on the beaches from Leland to Traverse City.

Just outside Empire off M-72 stands a field of what looks like giant, glorious green beanstalks. What you’re looking at, however, is actually an essential ingredient for making craft beer. Owned by Dan and Allan Weisen, the Empire Hops Farm is the biggest hops producer in Michigan. The Weisens provide hops for a number of local breweries including: Stormcloud, Right Brain, The Filling Station and Shorts. 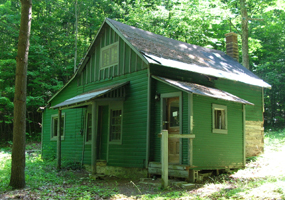 Located on the corner of CR 669 and M-22 in the Port Oneida area of the park, Northeast of Glen Arbor, is the Kraitz Cabin — the oldest building in Sleeping Bear. Built around 1856 (and fully restored in 2004), the cabin is believed to be the first permanent home of Francis Kraitz. Kraitz likely selected the homestead, originally located across from St. Joseph Catholic Church about a mile south of the cabin’s present location, because of its level, well-drained and fertile soil.

Restored in 2004, the cabin was first “discovered” by park employees who originally thought the cabin was a 1940s era cottage. Inspection of the building revealed a well-preserved, hewn-log cabin underneath the clapboard siding. The cabin now provides the Lakeshore’s best example of log construction common of Sleeping Bear’s first settlers.

Even more rare than spotting a black bear at the Lakeshore is seeing a Sleeping Bear cougar. Every year visitors report sightings of cougars running wild in the park. Most of the time, however, tracks and other physical evidence left behind at the scene suggest the animal in question is more likely a bobcat or a lost dog.

From November 2004 through April 2005, researchers conducted studies on more than 150 miles of roads and trails that crossed through all major habitat types in the Lakeshore, utilizing three methods to attempt to document cougar presence: remote motion-sensing camera systems; track surveys; and investigations of reported observations of cougars or their sign. The motion-sensing cameras were operational for 863 nights and not a single image of a cougar was obtained. Despite the fact that people still claim to see cougars more than occasionally in the Lakeshore, no hard evidence has ever been documented.