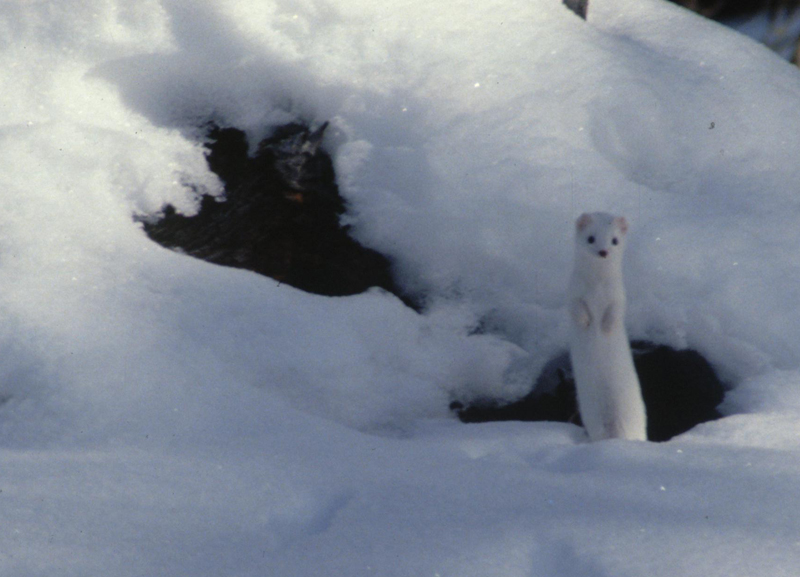 Ferocious little hunters of small birds, squirrels, mice and other small animals, weasels and ermines two distinct types of weasel that live in the state of Michigan. With an average full-grown length between six to 12 inches, ermine are bigger than the least weasels that average six to eight inches in length. Additionally, the fur colors for these two weasel types are slightly different. While both species sport white fur during the winter months, the tip of the tail turns black for ermine. 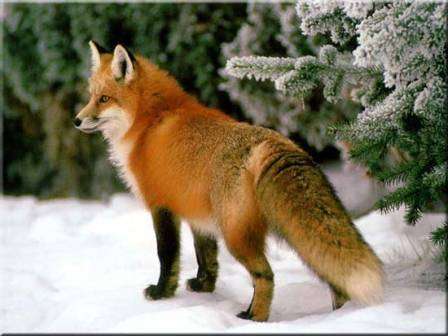 Sleeping Bear is home to both red and gray foxes. The larger red fox is especially common in areas with fallow and cultivated fields, meadows, bushy fence lines, woody stream borders, and low shrub cover along woods and beaches. The less common and smaller gray fox prefers deep forests and brushy woodlands for their homes. 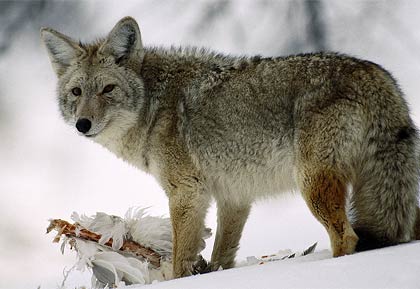 Often hard to distinguish from medium-sized German shepherds and often confused with Michigan wolves that do not inhabit the park, coyotes are most often spotted by visitors during their breeding period, which occurs from mid January into March.

There is wide variation in the coyote's color, but generally their upper body is yellowish gray, and the fur covering the throat and belly is white to cream color. The coyote's ears are pointed and stand erect, unlike the ears of domestic dogs that often droop. When observed running, coyotes carry their bushy, black tipped tail below the level of their back. Wolves, which are primarily found in Michigan's Upper Peninsula, are much larger than coyotes and carry their tail in a horizontal position while running. The size and weight of coyotes are commonly overestimated, because their long fur masks a bone structure that is slighter than that of most domestic dogs.

Snowy owls sometimes fly thousands of miles away from their home in the Arctic in migrations called “irruptions”—travels that occasionally led to sightings at the Lakeshore. One of the largest breeds of owls and definitely the most rare bird you’ll ever chance to see at Sleeping Bear, snowy owls take their name from their white coloring. Weighing around four pounds, snowy owls are the heaviest owls in North America and they grow to be about 24 inches tall with an average wingspan of four feet. The males are pure white, while females have dark patches of plumage and the male is slightly smaller than the female. Adult males grow whiter as they age, but females retain their brown markings.

The animal responsible for most mistaken reports of cougars in Sleeping Bear Dunes over the years, the bobcat is two- to 3-feet long, weighs anywhere from 25 to 35 pounds and—contrary to popular misconception—does have a very, visible tail approximately six inches in length. While coloring can appear similar to the much larger cougar (which is five to six feet long, weighs anywhere from 100 to 180 pounds and sports a tail up to 3 feet in length), bobcats are often spotted and have black coloring on end of tail and tips of ears. The ears are also pointed with small tufts of fur, much like the lynx (another Michigan predator not known to currently inhabit the Lakeshore).