Almost a month ahead of schedule and just in time for the peak biking season, the new 5.5-mile segment of the Sleeping Bear Heritage Trail between the Dune Climb and Empire officially opened on Friday, June 6th. The new segment doubles the trail length to 9.5 miles from Empire to Glen Arbor.

Find out what might make this the most scenically beautiful to date along with information on BATA’s “Bike and Ride” summer program that allows area bikers to ride the trail one way (or both), and then hop back on the bus home afterwards.

Closing in on the end goal of 27 paved miles, the SBHT completed the latest section of trail earlier this month thanks to the combined generosity of private donors that also a challenge grant from Rotary Charities that totaled $50,000 last December.

The new, 5.5-mile section of trail — from Glen Arbor to a mile before Empire (ending at Lacore Road, which runs right into the town) — offers bikers more gently rolling terrain, hardwoods forests and sandy hills covered in dune grass and wildflowers. Best of all, access to the trail is easier than ever thanks to BATA’s Bike-n-Ride program that continues to grow into this, its second season servicing the SBHT.

One of the few programs of its kind in the U.S., Bike-n-Ride is on track to break the record of 477 bicyclists served in its first two months of service (July and August) in 2013.

Thanks to this enthusiastic reception, BATA has added a second Bike-n-Ride route for 2014 —Traverse City-Glen Arbor/Empire Village Loop (Route 11). This allows for riders to bike the newly paved SBHT between Glen Arbor and Empire and then ride the bus to any other stop along the route.

“In addition to offering a fun leisure activity, the Sleeping Bear Heritage Trail is intended to be a meaningful transportation alternative,” says Tom Ulrich, Deputy Superintendent of Sleeping Bear Dunes National Lakeshore. “The new Bike-n-Ride route makes it even easier for visitors to leave their cars behind, reducing carbon emissions, easing parking congestion, and keeping the park picturesque and welcoming for future generations.” 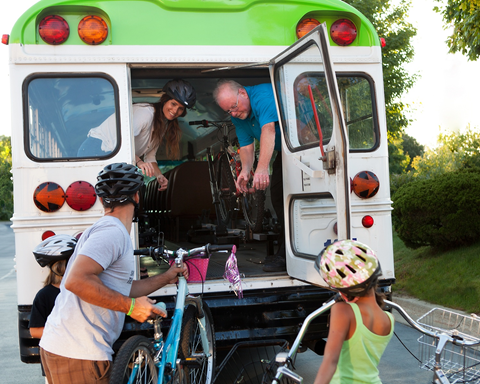 The one-way bike trips are approximately 17 miles between Traverse City and Suttons Bay on the Leelanau Trail and 11 miles between Glen Arbor and Empire on the SBHT. Bike-n-Ride buses allow for 11 bikes to be transported — at no cost. Riders will be charged a $3.00 per-person fare that can be paid on the bus in cash (debit/credit cards not accepted) or with a BATA FlashFare card.

For the Suttons Bay/Northport Loop route, BATA will provide every-other-hour Bike-n-Ride service on weekdays beginning at 5:00 a.m. and ending at the Hall Street Transfer Station at 7:50 p.m. For the Glen Arbor/Empire Loop route, weekday service will allow for three runs. The weekends offer three runs per Loop route.

Bike-n-Ride is not an express service; the bus will make regular loop stops. This is a first-come, first-served program, so arriving early for pick-up is advised. For more information, bus schedules and maps, call BATA at 231.941.2324 or check out their website at www.bata.net/bikenride.