The last time the Great Lakes saw this much ice was in 1994 when coverage hit 94 percent. As of last week, ice covered 80 to 90 percent and, depending on who you ask, Lake Superior is now completely frozen over.

Check out what experts are saying about how this winter’s deep freeze may impact lake levels and Northern Michigan temperatures in the months to come.

"With all of this ice, all the sunlight that hits the surface of the lake is going to get bounced back out into space, so it's going to take longer to get warmer this spring and summer," according to Associate Professor Jay Austin of the Large Lakes Observatory in Duluth, Minnesota.

Austin spoke with AccuWeather reporter Kristen Rodman earlier this month after satellite imagery revealed near complete ice coverage of the Great Lakes thanks to months of relentless Arctic winds and bitter temperatures. 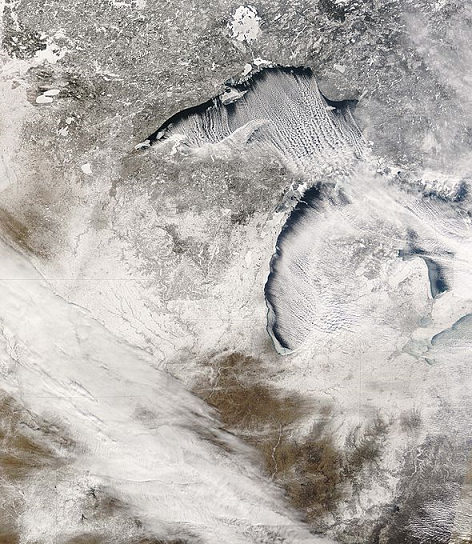 MODIS captured this image of Lake Superior and Lake Michigan on February 5, 2007, from NASA's Terra satellite.

How this may impact farmers and orchard growers in Northern Michigan remains to be seen. But, for now, many experts believe that the near total ice coverage is ultimately a positive thing for the Great Lakes.

After the historic lake-level lows of last year, extensive ice coverage on the lakes acts like a natural brake on evaporation, according to a February report in The Voice. In an interview with Voice reporter Jim Bloch, George Leshkevich—an ice specialist with the Great Lakes Environmental Research Laboratory in Ann Arbor—would not go so far as to say lake levels would rise in 2014. But he did predict that less evaporation will likely mean that current water levels will remain the same as last year, especially on Lakes Superior, Huron and Erie.

Leshkevich is also one of many experts warning that this winter is showing no sign of ending anytime soon and the all-time ice coverage record for the Great Lakes—95 percent, set in 1979—stands a very good chance of falling if the most recent drop in temperatures continues into March.

“Ice tends to be at its peak in mid to late February in the lower Great Lakes,” Leshkevich said, “and late February to early March in more northerly Lake Superior.”