Did you know the Sleeping Bear region is home to a growing microbrew scene? Taking a cue from the popular TC Ale Trail, six craft breweries from Northport south to Frankfort have banded together to form a new, beer tasting trail of their own. Read on. 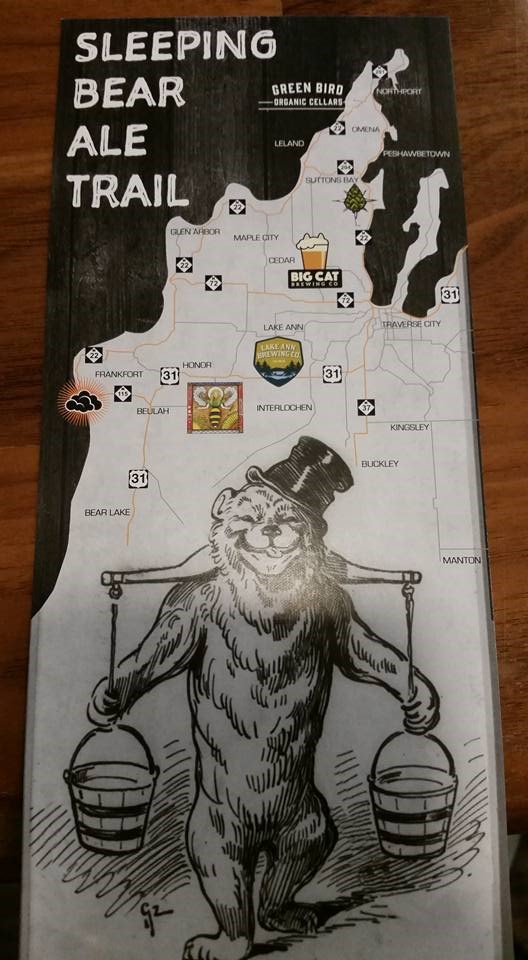 Wine tours have long been a one of the favorite things to do for visitors to Northwest Lower Michigan. More recently, local distilleries specializing in small batch whiskeys and vodkas have also been promoting tours as a way to get the word out about the high quality artisanal spirits being produced here.

Now, Sleeping Bear regional brewers have banded together to form a tour for local and visiting beer lovers, too.

“Being so far outside Traverse City, it really didn’t make sense for places like The Hop Lot in Suttons Bay and Stormcloud in Frankfort to be part of the TC Ale Trail,” says Matt Therrien, owner of Lake Ann Brewing Co., “so we decided to start one of our own.”

According to Therrien, local brewpub owners funded a brochure-like rack card that gives information about the offerings at each establishment along with a map to show where they are in relationship to one another. The group has also purchased a domain name with tentative plans to create a website for visitors in the future.

“With so many wineries around,” says Therrien, “there’s definitely a lot of opportunity for beer makers since a lot of people—particularly men who tag along on wine tours—don’t really like wine. I also think that you’re going to see more local breweries open in the years to come along with more and more wineries getting the necessary equipment and licensing to make and sell their own brands of beer. Hopefully, establishing a trail-style tour will bring more exposure to these businesses.”

Right now, according to Therrien, St. Ambrose Cellars is working on licensing for beer making. There have also been rumors of beer makers interesting in setting up establishments in other small, Sleeping Bear towns like Empire.

To get your copy of the Sleeping Bear Ale Trail map, visit any of the six brewpubs along the tour. Click on the hyperlinks above to get directions to the one nearest you.