Now available at Rocky’s, The Homestead’s flagship gear and apparel shop, Ice Caves of Leelanau, offers a rare and magnificent glimpse of the coastal ice formations that drew tens of thousands of visitors to the region for a few short weeks during the winter of 2014.

There are 47 photos in this incredible new book. Here, Scott shares three of his favorites. Check out this special sneak peek along with information on how you can get your copy, today.

Ken Scott already sorted through hundreds of photographs to select the most stunning for his new book, Ice Caves of Leelanau.  So when we asked him to pick three to give readers a sense for what other awesome images await between the hardcovers of this 48-page keepsake volume, we knew the assignment was going to be tough. But Scott managed to come through with three awesome images and some words to explain why he thinks these really standout.

One of nine photos stitched together to make a panorama, Scott says this image of a Lake Michigan ice cave with the Milky Way in the background captured the otherworld “beyondness” and magic that was being there and beholding the Leelanau ice caves for the first time. 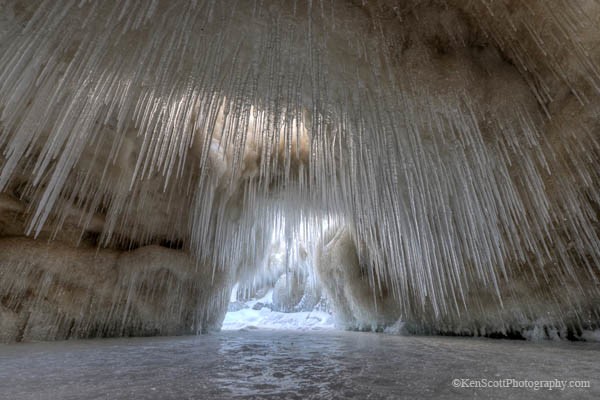 “Finding this cave was unbelievable,” says Scott. “To realize it was created from scratch just weeks before and would be gone in a matter of weeks ... incredible!” 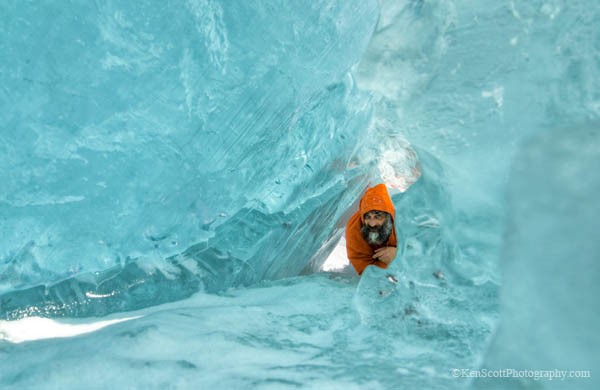 “I call this one Selfie In Blue,” says Scott. “This was shot through a pressure ridge tunnel of turquoise blue ice­. It was so amazing to see this formation up close and be immersed in it—and scary too!”

It was a natural phenomenon and once-in-a-life chance to get a glimpse of a wintertime spectacle that might not happen again in our lifetime. But over the course of many days during frigid winter month of March, photographer Ken Scott braved the elements to capture a series of images that forever preserves the incredible natural beauty of the caves, volcanoes, towering walls and jagged coastal ice formations that gave fans of this region more photographic proof why Leelanau County and the Sleeping Bear Dunes National Lakeshore is “America’s Most Beautiful Place.”

To make this book a reality, Scott collaborated with Traverse City author Jerry Dennis (who provided a moving essay to accompany these breathtaking images), book designer Angela Saxon Design and Barbara Siepker of Leelanau Press. Scott will be appearing throughout the Glen Arbor area this summer to sign and promote the volume.  Contact Leelanau Press for places and dates.

Ice Caves of Leelanau is available now at Rocky’s Apparel & Gear for only $25.