Last month, National Park Service officials announced that they are reworking their “hazard tree management plan” to allow them to take down more diseased trees before they become dangerous to visitors at the Sleeping Bear Dunes National Lakeshore.

Here’s the news on why this could mean trouble for two endangered species of bat that call the Lakeshore home. 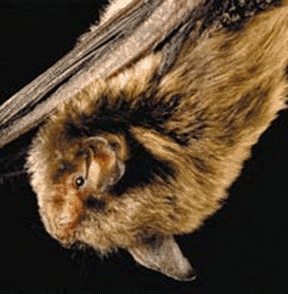 Earlier this year, the National Park Service said it wanted to create a more aggressive tree take-down and restoration policy to stay ahead of trees damaged by beech bark disease and the emerald ash-borer at the Sleeping Bear Dunes. Officials are uncertain, however, how to get started without negatively impacting the Indiana (pictured above) and northern long-eared bat, two of the Lakeshore’s most endangered species, according to a March report by the Associated Press.

Bats feed exclusively on insects—a lot of them—including West Nile spreading mosquitoes and crop-damaging bugs. In a recent interview with Interlochen Public Radio, Bill Scullon, the statewide bat program coordinator for the Michigan Department of Natural Resources, estimated that bats had an economic benefit to Michigan farmers of somewhere between $528 million to $1.2 billion dollars.

While bats tend to hibernate through the winter in caves, once temperatures rise they head out to forests to mate and roost in large trees with peeling bark and many crannies—exactly the type of conditions found in the diseased and dying trees crews are aiming to remove throughout the summer.

"The bats might be using those trees during the summer time for maternity roosts or any other kind of roosting habitat," said Vincent Cavalieri, a wildlife biologist at the U.S. Fish and Wildlife Service, the NPS official quoted in the AP report. "It's just something for the park to make sure any tree removal will be accompanied by some sort of checking for bats during summer months when the bats will be using the trees."

Bats that are roosting, pregnant or have recently given birth could become disoriented or killed if their roosting trees are removed, according to Cavalieri. Since wildlife officials don’t want to take down any trees that might be harboring roosting bats, the plan remains on temporary hold. A decision on an updated tree removal plan in the Sleeping Bear Dunes National Lakeshore is expected in the weeks to come.