It’s April, which means Pierce Stocking Scenic Drive will soon be open for summer. To mark the occasion, we’ve compiled these totally random yet genuinely interesting facts about one of the Sleeping Bear Dunes most popular attractions.

The Name Of The Road

A local lumberman and builder of roads, Pierce “Pat” Stocking first heard about the government’s interest in the region in 1962 when Senator Phillip Hart first introduced a bill in Congress for the Sleeping Bear Dunes National Park. Reflecting on her father’s legacy for the Glen Arbor Sun, Stocking’s daughter, Kathleen, remembered how her dad already owned more land in the area than any other individual—an estimated 10,000 acres or more—in the early 1960s. “Gambling on a big government payout,” Stocking decided to buy even more local land and “build a park where the national park was slated to be.” Sleeping Bear Dunes Park—as the road was originally known—first open in 1967. Charging $2 per car, Stocking operated the scenic drive until his death in 1976. 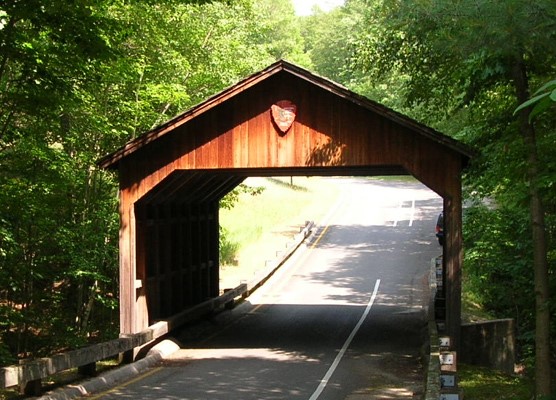 Of the dozen spots to stop along the 7.4-mile road, the covered bridge, is not only the first but also one of the drive’s most popular stops. Stocking built the original covered bridge, the sides of which were largely consumed by porcupines and had to be rebuilt during a renovation of the road that started in 1984.  During the renovation, the NPS moved the original entrance to the road (which was closed because it was susceptible to drifting sands), added a bicycle lane, built in the observation platforms and raised the vertical clearance of the covered bridge. Renovations were completed in 1986.

According to a 2015 MLive article, the Sleeping Bear Dunes routinely requires more emergency rescues than Yellowstone National Park. In 2014, there were 47 search-and-rescue operations conducted to aid 61 people at Lakeshore—a lot of them at Pierce Stocking Scenic Drive. (Click here to read it.) Sometimes rescuers are called in due to falls at some of the scenic overlooks; in 2002, the Detroit Free Press noted that a half-dozen visitors fell and had to be rescued by paramedics at Overlook 9 and 10. But more commonly, rescues are required when visitors disregard warning signs and climb down the sandy bluffs only to find themselves too fatigued to climb back up.