The winds were so fierce, the storm’s destruction so random and violent, that in hindsight it’s amazing nobody died. Residents and visitors to Glen Arbor and the Sleeping Bear Dunes will likely be telling their grandchildren about the destruction wrought by an epic wind storm that slammed into Leelanau County last August. And, kids being kids, they will probably think you’re making it up.

That’s one reason to get your hands on a copy of the new “crowd-sourced” book by Traverse City publisher, Mission Point Press. Check out how you can pre-order your copy and attend the official book launch party being held this Sunday. 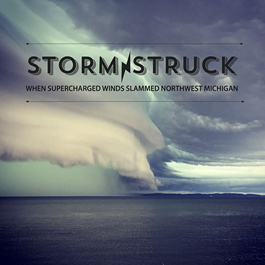 On the evening of August 2nd, supercharged winds whipped across Lake Michigan and slammed into Northwest Lower Michigan. In a swath of destruction that stretched from Glen Arbor to Elk Rapids and beyond, the winds toppled thousands of trees, leaving houses with gaping holes, thousands of Northern Michigan residents with no power for days, a Sleeping Bear Dunes National Lakeshore that is, said one official, unrecognizable, and a cleanup that could take years.

Hundreds of local residents and visitors captured images of the storm and its aftermath. Mission Point Press has compiled those images and the firsthand experiences of witnesses from Leelanau, Grand Traverse and Antrim counties into a new book set for release this Sunday, September 27th.

This 104-page book (available in a soft cover or e-book format), also features an in-depth analysis of what caused the storm and why it was so devastating. It features stories from the people affected, mapped details of the storm’s path across Northern Lower Michigan and extensive crowd-sourced photos from over 60 different photographers.

This Sunday — September 27th from 3 to 5 pm — Mission Point Press will host a Storm Struck launch party at the First Congregational Church on Center Road in Traverse City. Many of the photographers featured in the book will be present along with a lively panel of weather experts and National Park spokespeople who will be talking about the storm and answering questions.

For anyone who can’t make the party this Sunday, you can order a digital (e-book) copy of Storm Struck now at Amazon Kindle.